After a disastrous attempt at a holiday earlier in the year, I swore to myself I would stay at home for the rest of the year. I was doing so well. In the space of a month I’ve turned down the chance to go to both the Canaries and the States. Something told me Cornwall was a safe bet.

So yesterday we climbed into a hire car in King’s Cross and hit the road. Said hire car was wearing my son’s breakfast before we’d even got out of the NW postcode zone. As were he and I.

‘Waste not, want dog’, our canine friend thought, lapping up my son’s regurgitated porridge as my friends and I tried to clean him up in the street.

Like most children the tears quickly became laughter and he thought it fit to immediately graze on a pouch of mushed up mango and another of banana, followed by a couple of biscuits. It felt wrong but the little fellow must have been hungry and he seemed happy with his choices. He managed to keep them down too and soon started bossing us all around so I could sense we were back on track.

Readying ourselves for a day in the Cornish sunshine, I bathed him and got him dressed. Very quickly. Quicker than usual because I didn’t want him to notice something was wrong. He’s got chicken pox.

So we’re on our way back to London less 24 hours before we arrived at our wedding weekender destination. We won’t see out friends get married and I won’t wear the new clothes I bought to avoid the potential pain of adorning the suit I both married and buried my wife in.

After the last trip we went on involved a trip to casualty and a child so unwell we had to stay indoors nearly all week, it’s hard not to stray into the indulgence of the question, ‘Why me?’

But I always get to the same answer. ‘Why not me?’ Strictly speaking that’s another question but we could be here all day and as I haven’t had chicken pox before I might not have the energy to waste.

See if it rains on your wedding day, it’s not because you’re a bad person. It’s just the weather.

If you break your leg just before you’re meant to walk down the aisle, it’s not an omen. It’s just bad timing.

And if a child’s temperature hits 41 degrees just before he’s due to get on a plane, or chicken pox the next time his father tries to emancipate the two of them for the weekend, it’s not because the world is conspiring against them. He’s just being a child.

I’m not going to say I don’t feel like falling to my knees, screaming at the heavens and pulling my hair out from its roots, but at least he’s got the little bastards out the way before I try to plan our month away to somewhere someday.

That day just got pushed back another year though. I haven’t got enough hair left on my head to risk another failed attempt.

The photo below us by my new friend Harry Borden 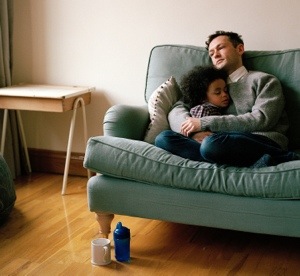